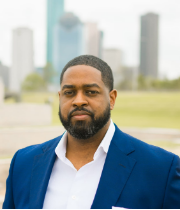 William H Dean III also known as Trey is a Realtor with United Real Estate in Houston. Trey has been in sales most of his life and credits his entrepreneurial spirit to both of his parents. Originally for Huntsville, Alabama he studied business at Alabama A&M University, from there he relocated to Houston back in the early 2000’s and he has called Texas home ever since. Being a salesperson is a natural fit for me, says Trey with his pass experience custom home construction and an aquarium design business gave him a the platform to start a career in real estate. His previous business aloud Trey to work with home sellers and buyers, celebrity and pro athletes alike, that experience benefited him understand their needs.  Trey obtained his license in 2009 and started working for one the largest Real estate firms in the country in 2010, since then Trey has found success in Real Estate as a top producer, having properties appear on HGTV’s House Hunter’s, and a mentor to other young agents just starting in the business. Even with temporary personal setbacks the effected his life in and outside the office, didn’t stop him from his vision of becoming a trusted advisor in the luxury real estate space. When he not working, Trey enjoys volunteering and working with the youth.

Trey has been married for well over two decades to his wife, Twyla. And they have two girls, one who happens to serve in the US Navy.

The entire team at United Real Estate has contributed to the most amazing home purchase process a person could expect. They are simply a dynamic group of people with extensive interpersonal skills in addition to expertise in every facet of the business. Thanks team!

After meeting with several local real estate brokerage. I am so happy that I made the decision to work with United Real Estate .They will educate you through the entire process and listen to your needs to understand your real estate objectives. Thanks !

Each Office Independently Owned And Operated. The information provided herein is deemed accurate, but subject to errors, omissions, price changes, prior sale or withdrawal. United Real Estate does not guarantee or is anyway responsible for the accuracy or completeness of information, and provides said information without warranties of any kind. Please verify all facts with the affiliate.
Copyright© United Real Estate
Privacy Statement-Terms Of Use

Leave a message for Trey